Education in the 21st Century

O Pure Earth, may that we utilize your soil well, For creative production, Without causing you injury or harm and disturbing any vital element in you- Prithvi Sukta

Such a model necessitates active partnership of industry-academia-society-government to create a unique engineering graduate, exploring and exploiting the strengths of each other for the benefit of the student. 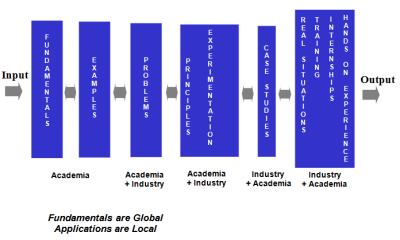 Various avenues, internships – rural, industry, and research; joint projects at the students, faculty, research, education levels; constant discussions and deliberations; team-teaching courses; joint evolution of dynamic curriculum, etc., will result in a graduate who is technically sound, sensitive to societal needs, exposed to the industry culture, and who quickly adapts to a new situation with ease in a rapidly changing world.

There is a lack of overall commitment to this partnership currently probably because of lack of perception and belief that this partnership will add substantial value to each partner. These partnerships take time to develop and typically involve many complex relationships. The onus appears to be on the academia to keep pushing the industry for their active involvement and partnership. The prerequisite is a strong R&D base, thinking, and commitment by the Industry. Issues regarding IP (Intellectual Property) and very clear and quickly enforceable IP laws need immediate attention.

An excellent example is the recently established IIT Madras Research Park that “facilitates the promotion of research and development by IIT Madras in partnership with industry, assisting in the growth of new ventures, and promoting economic development. The Research Park assists companies with a research focus, to set-up a base in the Park and leverage the expertise available at IIT Madras”. The Park has evolved an ingenious, innovative ‘credit system’ to attract and retain companies.

I believe we academics need the industry more than they need us! If we agree that this is desirable, doable, and must be done then we together need to do the following:

It would be desirable to have the Academic institutions, Development labs, and Entrepreneur Park in close proximity with each other, preferably on the same campus, with in-built mandate for cooperation and collaboration – students, faculty, researchers (a multi-way process). This arrangement would facilitate converting ideas into innovation and thence to manufacturing.

If India has to become a R&D and manufacturing hub, as also provide high quality higher technical education to its potential candidates, the number of PhDs has to grow tenfold to about 10,000/ year within the next 8-10yrs from the present level of 1000. How do we achieve this target? In the beginning the bulk of the demand for PhDs will be in academia and R&D institutions because of the present shortage in faculty and researchers. The industry need for PhDs will grow as Indian industry moves more into R&D, innovation, and product development.

The student target groups are: fresh BTech/ BE, MTech/ ME; professionals in industry and other organizations; non-PhD faculty in technological institutions; foreign students (need to aggressively market our strengths).

In recent years IITs have substantially increased their PhD output in engineering. IIT Bombay is expected to produce about 300 PhDs in engineering per year by 2013-15 and 600 by 2020. Similar drive is assumed for other IITs, NITs, IIITs, and private institutions. Also worth noting is the number of PhDs in technology from Institute of Chemical Technology, Mumbai (ICT, former UDCT, Mumbai), currently about 80, 100 by 2012, and 200 by 2020. The QIP (Government of India launched the Quality Improvement Program (QIP) in the year 1970 and established 8 QIP Centers at 7 IITs & IISc) has to be enhanced. Some of the NITs (out of 30 in India currently) have achieved high quality BTech graduates, but due to paucity of PhD faculty and resources, have not been able to push their Master’s and PhD programs to the desired extent. They have the potential and need to be supported financially and encouraged to increase their PhD output. They should be brought on par with the IITs in say 10yrs. The QIP or a new innovative program should be established so that a faculty member with MTech degree can obtain her/ his PhD, through a network of collaborating institutions.

This will require:
1. A mentoring program through which faculty will mentor, excite and motivate large number of BTechs from all institutions (especially from the IITs) to continue for PhD degree. It will also involve aggressive marketing with assurance of challenging career opportunities and excellent placement with attractive remuneration package.
2. Attractive financial assistance (Research and Teaching Assistantships, about 40% of Assistant Professor’s remuneration per month, with tuition waiver).
3. Minimum time duration for PhD (4-5yrs beyond BTech/ BE) as well as flexibility in academic and research programs without compromising quality. This would be necessary especially for Corporate sponsored full time employees bringing their in-house problems for research.
4. Financial support for attending and presenting papers at national (at least once a year) and international conferences (at least once during PhD program).
5. Possibility of spending 6-9 months in a collaborating lab of a reputed university abroad under a joint research collaboration program. Also, create “virtual forums” using commonly available communication technologies to increase the interactions with universities and industries globally on a more regular basis than a one-off effort. This will also increase the networking with PhD students in other institutions and encourage collaborations. Individual faculty members probably engage in such activities already and industry (especially IT related) uses this extensively. So, we need to leverage this and make it more pervasive.
6. Working jointly with Industry R, D & T centers to identify research projects.

After independence in 1947, India endeavored towards development and established:

i. A strong foundation of basic industries such as steel, coal, oil, defense, atomic energy, and space;
ii. A university system with a few excellent institutions, such as IITs, IISc (1909), TIFR (1945), IIMs (IISc: Indian Institute of Science, Bangalore; TIFR: Tata Institute of Fundamental Research; IIM: Indian Institute of Management) (25+ universities, 5 IITs, 17 RECs – the Regional Engineering Colleges (now NITs), and about 575 affiliated colleges);
iii. A network of National and Regional Laboratories under Council for Scientific and Industrial Research (CSIR); and,
iv. Atomic Energy, Space, and Defense establishments, to generate a large pool of scientific and technological person power, taking the Nation towards stated objectives, as defined in the two important resolutions.

Science Policy Resolution (1958): “To secure for the people of the country all the benefits that can accrue from the acquisition and application of scientific method.”
Technology Policy Resolution (1983): “Indian science & technology must unlock the creative potential of our people and help build the India of our dreams.”

The main objective of technical education in India is succinctly and elegantly stated by late Pandit Jawaharlal Nehru, the First Prime Minister of Independent India:
“To provide scientists and technologists of the highest caliber, who would engage in research, design, and development to help build the nation towards self-reliance in its technological needs.”

Economy, R&D
Indian economy in 2014 is the 3rd largest in purchasing power terms. India is the second fastest growing economy in the world. India’s GDP has touched US $1.88 trillion. However, this rapid growth has not been accompanied by a just and equitable distribution of wealth among all sections of the population. Only in recent times the government is pushing inclusive growth. However, there is much to be desired in the process of implementation and effectiveness. Distribution challenges need to be tackled through better deployment of public resources for public good.

Table 1 provides some details regarding India’s R&D expenditure. For comparison, data for a few other countries is also provided. It is worth noting the data for Israel. India’s R&D expenditure is only 0.8% of GDP, most of the funding is from the Government, and the number of researchers per million population is alarmingly low as per the statistics of National Science Foundation, World Bank , OECD & Wikipedia (1,2).

Dr. Manmohan Singh, the then Prime Minister of India said in the 99th Indian Science Congress (Jan 3, 2012) that “Over the past few decades, India’s relative position in the world of science had been declining and we have been overtaken by countries like China…..As far as resources are concerned, the fraction of GDP spent on research and development in India has been too low and stagnant. We must aim to increase the total R&D spending as a percentage of GDP to 2% by the end of the 12th Plan Period (2012-2017) from the current level of about 0.9%” (3).

India has to substantially increase R&D funding and the number of scientific researchers for true global competitiveness and leadership (2). The Government is moving in the right direction and has increased allocation of R&D during 12th Plan period (2012-2017) to 75,304 Crore ($15billion) as compared to 25,300 Crore ($5billion) during the 11th Plan period (4). The question is how to ramp up the R&D researchers, especially the PhDs. The effect of low R&D expenditure by industry and government, especially the former, on national research related output from Indian scientists and engineers, is a small number of publications in reputed international journals, innovations, patents, start-ups, etc. in a billion-strong nation. It is felt by many that the quality of science research and innovation is also decreasing.

There is however, a silver lining and glimpse of hope in that in recent years, India’s several new grassroots innovators focusing on rural problems are making India a growing ‘incremental-innovative’ nation (5). Substantially more interaction between rural India and academia is needed to catalyze and expedite this innovation process. What is also crucial for India is breakthrough innovation, if it hopes to be a leading global economic power. I will address the issue of PhDs in engineering in my next blog.